Originally posted in October 2009, this post is about writing.

Does the writing process end? Is an author ever really satisfied with the end product of all his labor, or is that product just what could be produced in the time available? I started researching my masters thesis on the aftermath of Pearl Harbor in May 2008. I thought it would take no more than six months to research and write, but I just submitted my Committee draft eight days ago. So much for researching and writing in six months, and my thesis committee, which consists of three history professors from Millersville University, will most likely require that more editing be done before the final draft will be accepted by the University. When will it end?

I was told some time ago by one of my professors that the entire process would take a year or more. She was right, but I did not believe her. The research and initial writing took a total of about nine months on and off. At the end of August 2008, I had written a preliminary prospectus and put research aside to concentrate on classwork. By January 2009, I was eager to continue research, and in March, I was prepared to investigate primary sources available at the National Archives in Washington, DC. The trip to the National Archives was an exciting and unique experience, which has been one of the highlights of my research. I reluctantly submitted a short paper to the Phi Alpha Theta Conference in April. I was not happy with the paper or my presentation to the conference, but the paper did have some positive aspects, which formed the spine of my thesis. 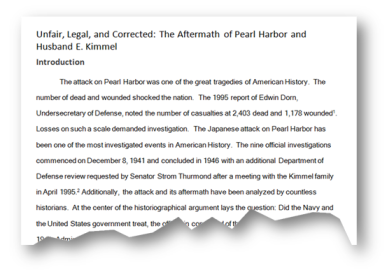 My presentation was lackluster at best, so I did not receive the feedback I had hoped. However, I sent the paper to three of my friends and their constructive criticism was extremely helpful. By mid-July, I completed the first half of the rough draft of my thesis, and submitted a completed draft to my thesis advisor by mid-September. After incorporating his suggestions and some other editing, a draft was submitted to my thesis committee on October 1, 2009. The process sounds simple now, but each stage had its own unique difficulties.

The overarching difficulty was and is novelty; I have never attempted a project on such a scale before. Although I have written a previous article “United States, Japan, and Pearl Harbor”it did not undergo the level of editing and rewriting that my thesis has and will continue to undergo before I complete it. The constructive criticism I have received has improved the work, and I am indebted to my friends and my thesis advisor for their assistance. In addition to novelty, starting was also difficult. Not in the sense that I did not know where and how to begin, or I did not have a general direction, but I lacked a clear and interesting path connecting the topics I wanted to discuss. Hopefully, the Committee draft has solved that problem. I will know by next Friday night. I knew what I wanted to discussing in my thesis by the time I completed the conference paper, which was probably one of the reasons my thesis advisor suggested I participate in the conference.

The next difficulty was constructing an argument. Fortunately, the aftermath of Pearl Harbor provided ample historiography to analyze. At the center of the historiographical debate was whether the Navy and the United States government treated, the officer in command of the Pacific Fleet on December 7, 1941, Admiral Husband E. Kimmel, unjustly. Seeking an answer to whether Kimmel was unjustly treated, historians have mined the testimony, exhibits, and conclusions of the nine official investigations into the attack, as well as other sources. Based on that analysis, there are those who assert that Kimmel as Commander-in-Chief Pacific Fleet could have done more with the resources available to him. Therefore, relief and retirement at the rank of Rear Admiral was fair. Furthermore, posthumous advancement on the retirement list is unwarranted. Conversely, there are others who maintain that Kimmel was made a scapegoat and unjustly punished. Therefore, to correct the injustice of the Roberts Commission charge of dereliction of duty; they argue that Kimmel should be advanced on the retirement list to the rank of Admiral under the Officer Personnel Act of 1947.

It seemed simple enough; all I had to do was determine what aspects of each argument failed to explain what happened in the in the aftermath of the attack and then offer an argument that was in between the two extremes. So, borrowing the main concept of Richard Godbeer’s Sexual Revolution in Early America that contemporary knowledge and belief must be set aside in order to understand historical events in their proper context, I found that the argument that Kimmel could have done more with the resources available to him relied on such contemporary knowledge. However, explaining that failing was extremely difficult and led to the construction of the most difficult paragraph to write. I hope the paragraph clearly explains the concept. 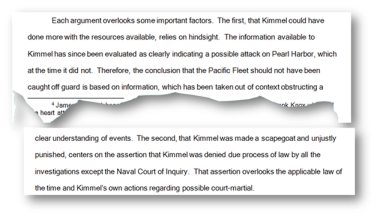 I am nearing the end of the process and the well is running dry. I do not know how much more rewriting I can do. I will find out how much rewriting I will have to do next Friday afternoon. My thesis is at the point where there is not much more I can do with it. I am certain it can be improved, but I am not sure how. Now every time I reread a paragraph or a section with the idea of making some changes, I leave it alone. Is it because once on the page is good, or am I just tired and running out of ideas? I do not know which is probably why there it is a thesis committee in the first place. Two sets of fresh eyes and one set that is familiar with the work (my thesis advisor) will help in its improvement.

I chose to write a thesis as part of my master’s degree program because I wanted to learn more about the process of writing history. It has taught me that there is a time in every writing project when the author simply runs of steam and that is when the writing process truly ends.