Ben is quoted in the Expelled Leader’s Guide stating the following “In today’s world, at least in America, an Einstein, or a Newton, or a Galileo would probably not be allowed to receive grants to study or to publish his research” (2). The assertion that the work of these scientists would be suppressed in today’s world, for Europe has not embraced Intelligent Design either, takes their achievements out of context and distorts their scientific significance. Someone as intelligent as Albert Einstein could probably publish at least three scientific papers while holding down a job, which is what Einstein did in 1905. According to Stephen Hawking in his book, The Universe in a Nutshell, Einstein held a minor position at the Swiss patent office and during that time “he wrote three papers that both established him as one of the world’s leading scientists and started two conceptual revolutions, revolutions that changed our understanding of time, space, and reality itself.” That suggests that Einstein demonstrated the kind of independence and initiative that American society rewards. However, Hawking makes clear that by 1921 the Theory of Relativity was considered too controversial and was not completely accepted by the scientific community, and now it is completely accepted by the scientific community. Additionally, the predictions of the Theory of Relativity “have been verified in countless applications.” Alas, the same cannot be said for Intelligent Design, but then, it is not a scientific theory.

As for anyone achieving anything comparable to what Isaac Newton achieved, the first physicist that comes to mind is Stephen Hawking. He, like Newton, is Lucasian Professor of Mathematics at Cambridge University. Newton was elected to the position in 1669 and his Principia Mathematica was published in 1687. Thus, he continued to publish scientific work while he held that position. The Principia Mathematica is probably the single most important work ever in the physical sciences. As Newton said, “Gravity explains the motions of the planets, but it cannot explain who set the planets in motion. God governs all things and knows all that is or can be.” That statement does not support irreducible complexity; it merely draws a distinction between scientific physics and metaphysics, which is in line with the principle of economy. An intelligent designer is not part of the Theory of Gravity, for his actions cannot be observed. Therefore, they should not be part of any scientific theory of the universe. Similarly, in A Brief History of Time, Hawking also adhered to the principle of economy, for he argued that any actions taken by God before the big bang (the beginning of the universe) would have no observable consequences, thus they should not be part of any model of the universe.

Galileo was only arrested after the Catholic Church bent over backwards not to. According to James Burke in his series The Day the Universe Changed in the program “Infinitely Reasonable,” the view of the universe was based on Aristotle’s 2000 year-old observations which placed the earth at the center of the universe, and the Moon, the sun, the planets, and the stars in orbit around the earth. It was a kind of straightforward as he saw it view. Later, Claudius Ptolemy constructed a complete cosmological model about 1210. 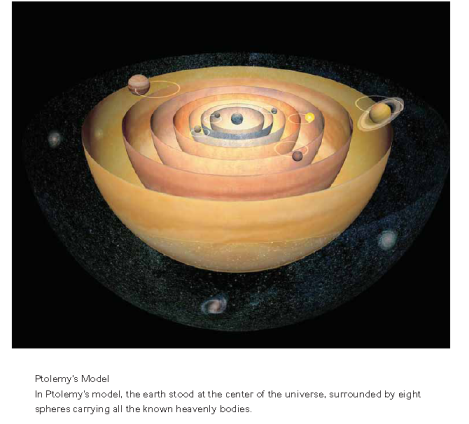 The above model was predominant for well over 400 years then in the 1500s, to correct problems with the calendar; a Polish priest Nicholas Copernicus examined the heavens at the request of the Catholic Church. Copernicus discovered that a sun centered system agreed with his observations. Thus, the earth became a moving planet rather than the stationary center of the universe. Copernicus’s manuscript was not published until 1543 after his death. His Heliocentric Theory could have upset the prevailing Aristotelian view of the universe had it been taken seriously. However from the Church’s point of view, the Copernican Theory was a brilliantly convenient mathematical fiction, for everyone knew that the heavens really did behave the way Aristotle and the Bible had predicted.

Nearly a century passed before the theory was taken seriously. Then two astronomers Kepler and Galileo publicly supported the theory. Kepler proved the accuracy of the Copernican Theory. Additionally, Kepler found the planets were not moving in circular, but in elliptical orbits around the sun. Galileo’s observations provided further proof that the planets did move away the Copernican Theory predicted. Moreover, Galileo observed that Jupiter had moons in orbit around it, our moon had mountains like the Earth, and the Sun had spots. In 1632, Galileo published A Dialogue Concerning the Two Chief World Systems. In it, he defended the Copernican Theory, and argued for the separation of science from the Church. He was arrested and the Copernican Theory was band, but only after Galileo refused to compromise.

Set in the proper context the significance of their work is clear, and so is the importance of publication of findings to the process of discovery. From Ptolemy to Einstein and Einstein to Hawking, each has verified, modified, or disproved the work of his predecessors that is the process of the scientific method. The problem with Intelligent Design is that it makes no verifiable predictions that can be tested by experiment. To claim that the work of the supporters of Intelligent Design is being suppressed like the work of Galileo misrepresents Galileo’s work. The fundamental difference between the work of Galileo and the claims of the supporters of Intelligent Design is that Galileo had evidence that verified the Copernican Theory and disproved the Ptolemaic Theory.

The supporters of Intelligent Design have found no evidence that disproves the Theory of Evolution. Expelled Exposed answers the film’s claims of suppression almost point for point, the fact is that Intelligent Design as produced no research to suppress, and the claim that researchers are being dismissed from their positions because of their support for Intelligent Design is also refuted. In fact, Expelled Exposed presents a compelling argument that each situation was distorted to fit the story line of the film. Additionally, supporters like the Discovery Institute produced a list of scientists that claim to have doubts about Evolutionary Theory. However, as the video below demonstrates the claim is dubious.

The Discovery Institute boasts that over 700 scientists “are skeptical of claims for the ability of random mutation and natural selection to account for the complexity of life.” Like Einstein’s reply to a book titled 100 Authors against Einstein, written after the Nazis took power in Germany, “Why 100? If I were wrong, one would have been enough.” I ask why 700 scientists? If Evolutionary Theory were wrong one would be enough.

One of the few drawbacks of being a full-time master’s degree student in history is that I do not have the time to keep track of the latest news on my favorite topics such as Intelligent Design. The movie Expelled: No Intelligence Allowed released on Friday, April 18, 2008, hit theaters near the end of the spring semester. A time when I was in the middle of writing my last five page book review, two ten to twelve page papers, and preparing for a final exam, thus I must have missed the television trailers promoting the film. I was not aware that a movie promoting Intelligent Design was due for release until today. I began my day with the intention of updating my Intelligent Design links page, and found that nearly two a half years after the Dover Pennsylvania decision that held Intelligent Design was not science and was Creationism; therefore, it violated the Establishment Clause of the First Amendment, Intelligent Design was still seriously being advocated as a scientific alternative to evolution.

“Expelled” is a shoddy piece of propaganda that props up the failures of Intelligent Design by playing the victim card. It deceives its audiences, slanders the scientific community, and contributes mightily to a climate of hostility to science itself. Stein is doing nothing less than helping turn a generation of American youth away from science. If we actually come to believe that science leads to murder, then we deserve to lose world leadership in science. In that sense, the word “expelled” may have a different and more tragic connotation for our country than Stein intended. Boston Globe, May 8, 2008.

Furthermore, Miller expressed concern that popular culture is increasingly turning against science and movies like Expelled are hastening the process.

John Rennie, the editor in chief of Scientific American, would agree with Miller. Rennie asserted that Expelled is “a shameful antievolution film [that] tries to blame Darwin for the Holocaust” (Ben Stein’s Expelled: No Integrity Displayed, April 9, 2008). Scientific American also did a podcast review of the movie as well as a discussion with the editor of the movie, Mark Mathis (part one, part two) in addition to other articles. Again, Intelligent Design is not science; therefore, mainstream science is not suppressing evidence that supports design theory because there is no evidence that supports Intelligent Design as a scientific theory. However Expelled maintains that Intelligent Design is cutting-edge science that the establishment is trying to suppress. In contrast, after evaluating the reviews and the evidence provided in the Dover decision and other sources it is clear that Intelligent Design is Creationism. It is unfortunate that in this movie Ben Stein appears to be a rebel without a clue. Hopefully, the public will choose to spend its money elsewhere.